The club celebrated its 50th Anniversary in 2014.

Both clubs flourished initially as the Beetle and the other Aircooled VW’s were still a bit of a novelty in the UK at the time, with their unconventional engineering and unusual styling. It is certain that a lot of early members joined to share their radical vehicle choices with others that had made a similar choice. You have to remember that VW at the time, only made three different basic models, The Beetle (Type1) the Split screen Van (Type 2) and the 1500 range Notchback, Fastback, and Variant (Type 3). VW was a pretty small organisation in the UK and the coming together of owners in clubs must have seemed a good idea. 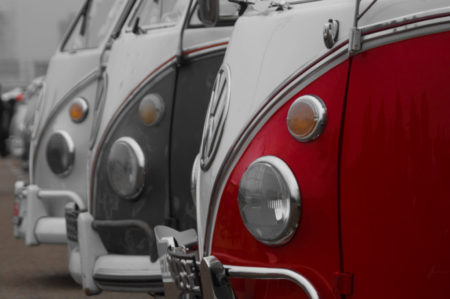 If this sounds the kind of friendly well organised club you would like to be a part of and you have any type of Volkswagen group vehicle, why not see our membership details in the links within this site and you can be sure of a warm welcome and we look forward to seeing you at any of our forthcoming events

Warwickshire club ran an early national meeting in the sixties held at Stanford Hall, which having read the article in Safer Motoring, attracted a massive turn out. This has since been surpassed with the annual Stanford Hall meeting held on the Sunday of the May Day bank holiday since 1976 organised by the club. This event is seen by many now as the country’s premier Classic Meet, catering for all models within the VW family. The next show will be the 41st, making it the longest running VW show in the UK.

Anyway back to the club’s history. Following various joint meetings at the end of the 1970’s both club committees felt that the way forward for both clubs was to amalgamate and go forward together as a stronger group. This occurred in early 1980 at an EGM held at the Prince of Wales public house in Hinckley. A committee was duly organised and as they say the rest is history.

Highlights for the club, other than our Stanford Hall event, are our regular European trips which started in 1983. Since then we have visited Germany and various VW plants on a total of eight occasions. This forthcoming year sees two further trips planned.

The club has many other social events and trips associated with our hobby throughout the year, many of which we are able to subsidise due to the financial success of Stanford Hall.